December 26, 2017
Nothing particularly sea-themed about this band except the name, but they're fucking killer live.


I created the Reef Elves as part of the 2017 Secret Santicore for a dude who wanted some previously undiscovered aquatic elves for Dungeon Crawl Classics. They're also statted for Lamentations of the Flame Princess as both class and monster here. 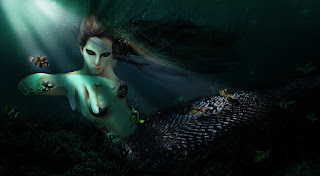 Reef Elves live below. Some, it is said, have never seen the sunlight, so deep are they beneath the waves.They take many forms, when it suits their purpose: as fish, as half-fish merfolk, or when they take to land, as bipeds nearly indistinguishable from common elves but for the coral growths down their spine, which they are careful to keep hidden.

Deep, hidden in dark crevices and the lava floes of mountains long consumed by the sea, they reside in their reefs; they live among the coral and foster its growth. The coral makes their homes, their tools, and their altars.

On these altars are their sacrifices. The land-walking races foolish enough to sail on dark seas, to fish in their waters, or to venture below. These offerings are bound to the coral, magically molded into its structure, crucified. They are picked apart by eels and the creatures of the ocean floor, and their bones join the coral. 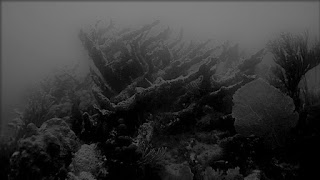 These deep elves are happy beneath the waves, in the darkness, with their coral and their bones. The sea provides for them. The only reason that they ever venture above is to claim more sacrifices, which they will happily do through trickery, kidnapping, or bloodshed. A rare one, given to wandering or born an outsider, may take to the adventuring life, but will never forget the call of the sea and the embrace of the coral.

There are tales of long lost cousins of the Reef Elves who live above on a floating coral island, roaming the shallows and coexisting peacefully with the land-walkers. No Reef Elf in living memory has seen one of these folk, but are sworn to kill them on sight for forsaking the ways of the deep.

Hit Points: Reef Elves gain 1d6 hit points at each level.
Weapon Training: Having lived their lives underwater, Reef Elves are untrained in any weapons but spears, garottes and nets. They may use other thrusting weapons at a -1d penalty (a d16 instead of a d20, for example).
Reef Elves gain the same proficiencies as Elves upon reaching level 2.
Alignment: Almost all Reef Elves are chaotic. Some may be neutral, but few, if any, will be lawful.
Magic: Reef Elves practice magic and use the same progression for spells as land elves, but with a few differences. They only know 1 spell at level 1, although the maximum number they can learn through study is the same as an Elf of equivalent level.
They have sworn off all worship except for that of the coral, and so may never learn or cast Patron Bond or Invoke Patron.
Caster Level: A Reef Elf’s caster level is the same as their class level.

Echolocation: Reef Elves can use echolocation to “see” up to 90’, both above and below water. The high-pitched sound is audible by other creatures, and can be quite harmful to those with keen hearing.
Underwater Natives: Reef Elves can breathe underwater as well as on land. They can swim incredibly fast, as well, traveling 30’ per round in bipedal form and 60’ per round in mer- or fish-form.
Changing Forms: All Reef Elves can change form up to twice per day They may take bipedal, half-fish (similar to mer-folk) or fish form. In order to do this, they must have a piece of the type of creature they wish to transform into, and may only transform into a fish form with Hit Dice equal to their level or lower. The transformation takes 10 minutes, and does not affect any of their items. Many Reef elves carry special pouches to store their items before they change shape, which they can carry with them in any of their forms (as long as they are a fish physically large enough) with encumbrance as normal.
Water Resistance: Reef Elves can make a Will save for half damage against any spell or magical effect using water.
Vulnerabilities: Reef Elves do not share land elves’ weakness to iron. Living so deep below, however, they are unaccustomed to a lack of buoyancy, and heavy or dense items such as metal or stone count as being 1.5 times their weight for the purposes of encumbrance.
Reef Elves take damage from Holy Water because of the salt water and blood which seeps into their very souls and is anathema to the laws of the patrons and gods they have forsworn. Holy Water does 2d6 damage to a Reef Elf and causes paralysis for one round unless they make a successful Fortitude save.
Heightened Senses: Reef Elves are natural hunters with smell nearly as keen as that of a shark. They gain a +4 bonus to tracking any creature which leaves a scent.
Action Dice: Similar to land elves, Reef Elves may use their action dice for either attacks or spell checks.
Reef Elf Titles 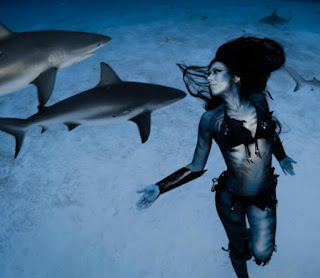 Reef Elves possess echolocation up to 90', are able to change forms between bipedal and mer-form, or into a fish of equivalent Hit Dice in 2 rounds, and are able to make a Fortitude save for half damage against any magical water damage. They are dealt 2d6 damage by Holy Water and are stunned for 1 round unless they make a successful Fortitude save.

A hunting party of Reef Elves will often be accompanied by trained fish such as sharks, eels, or other carnivorous sea creatures. There is a 50% chance that there will be 1 such creature per 4 Reef Elves encountered, with the creatures possessing 1d4 Hit Dice each.