Showing posts from April, 2018
Show all

Campaign Date:  August 31, 1630 CE Location:  Durham and the nearby forest to the northwest Cast:  Hernando de Pieza (Nic's Fighter), Ferrn the Shepherd (Ross's Magic-User), Mystery (Bill's Specialist), Peter the True XXVIII (Peter's Fighter), Arcturus Avenza (Arc's Fighter), Bemuk (Brady's Dwarf), Hans (Chance's Specialist), Inigo Pizaro (Anders' Fighter) and some random animal trainer hireling who is much more stable than Kelvin Roseman. After having caroused and dealt with a resulting tapeworm, the gang made preparations to go murder some elves. For context, the elves of this world are not fanciful forest fae, they're primitive tribal cannibals who evolved from human ancestors but in a more savage direction. Their pointed ears are the product of ritual trimming, and they have extensive ritual scarring and teeth filed to points. The party may have previously encountered them in the form of salt mummies in the Barrow of the Old King , but coul
Post a Comment
Read more 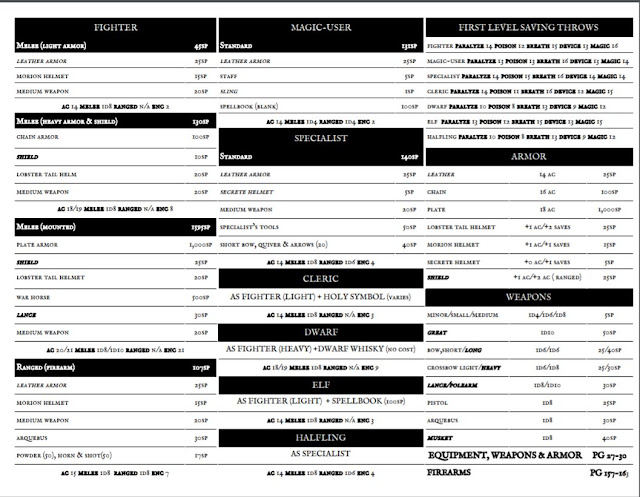 Recently I've been working on a few things I plan to publish to the web. This is the first of them: a pamphlet with everything a player needs to create a character quickly, either at the start of play or after dying mid-adventure. It's got basic character loadouts, saves for level 1-3 characters of all classes, and a full equipment list organized by category to make it easy to outfit PCs. I'll soon be uploading it as a PWYW on OneBookShelf, but until I get that done, get it right here, even more free-er than you can get it there. You can't even give me money if you tried, at least for now. Quick Character Creation Pamphlet And here's what it looks like: Make sure you print double-sided and flip on the short edge.
Post a Comment
Read more

Spells That Are Fucking Metal: Corridor of Chameleons

Here, have a creepy alien skin-swapping spell. It'll come in handy.  Inspired by Meshuggah, who just seem to have the best song titles for writing spells. Corridor of Chameleons No./Area Affected: 1 subject Duration: Permanent Many people wish they could be another person, live their life, have their possessions, be surrounded by their loved ones. There are those who can, and who do such things- replacing others while no one notices, taking their forms and following their mannerisms so well that even their closest friends and family could never notice. These beings come from far away, but it is possible to find them, to walk the long path to their home, and to learn their ways. By entering the Corridor, the subject may interact with these creatures and trade their form in exchange for the ability to take the skin of another person, whom they must know. They will take this form permanently; it is impossible to revert to their original appearance. In their new fo
Post a Comment
Read more

April 06, 2018
Here it is, everybody, the first, hopefully not last episode of me fucking around with a microphone. I talk to Ben Zacharias, one of the players in my game who I jokingly refer to as my intern because he helps me with website related stuff. We talk about his characters, how we got into roleplaying and other such things. This being my first time editing audio, it may have a few obvious snips where I take out Ums and Likes and whatnot but I think it turned out fairly well. The intro/outro music is from the track Deus Voluptas by Charun, hosted on freemusicarchive.org
Post a Comment
Read more

Spells that are Fucking Metal: Underneath Orion's Sword 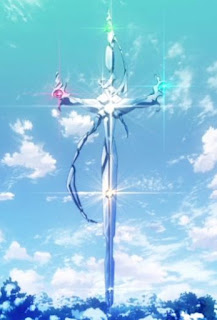 Given that the cold, alien, deadly universe is such a theme of LotFP, it seems appropriate that it should be fleshed out. While leaving it amorphous and unknowable is fitting, in my campaign it's established that science and magic can simultaneously be true, and of course magic can contradict itself. So there's nothing wrong with adding canonical details! Since I love mythology, I wanted to include something with a classical feel and add a weird touch. Underneath Orion's Sword  implies a myth, an alternate history, and uses a monster I've posted on the blog as well. Worldbuilding via spell. This entry was inspired by a result on the table in the back of VAM!, a resource I urge you to use if you're going to write your own Weird Magic spells but just can't find a good metal song title or come up with something on your own. The song is by a band called Pyogenesis, who I hadn't heard of but are pretty fucking awesome now that I've checked them out.
Post a Comment
Read more

Campaign Date: August 24-30, 1630 CE Location: Durham Cast: Hernando de Pieza (Nic's Fighter), Ferrn the Shepherd (Ross's Magic-User), Mystery (Bill's Specialist), Peter the True XXVIII (Peter's Fighter), Arcturus Avenza (Arc's Fighter), Bemuk (Brady's Dwarf), Hans (Chance's Specialist), Inigo Pizaro (Anders' Fighter) and Kelvin Roseman, a very disturbing animal trainer hireling. After exiting the Barrow of the Old King the party headed northward towards the city of Durham, where they hoped to set up a base of operations and perhaps head even further north to Scotland. There was debate about what was to be done with their investment in the still-in-progress inn back in Abingdon. The consensus among the party seemed to be that it was fucked and they should move on. A plan was suggested to head north and lead the Scottish south to conquer- the Ref was puzzled but admired the PCs' moxie.  A few wilderness encounter rolls were made but t
Post a Comment
Read more
More posts