Showing posts from October, 2017
Show all

Spells That Are Fucking Metal: Marrow of the Spirit

If Magic-Users are sketchy, disturbed motherfuckers, then why are their potions more Willy Wonka than Walter White? What's the incentive for a power hungry sociopath to make invisibility potions for sale to schmucks they probably view as inferior, when they could push them around and grind them under their heels like they deserve? Basically, here's the crystal meth of alchemy. Inspired by Agalloch. Wintery, proggy black metal. Marrow of the Spirit No./Area Effected: 1 corpse, touch Duration: Indefinite, duration of effects varies There is a reason why creatures from the outer planes blather on about devouring souls. Not because of the power within or the suffering it will cause their prey. Because they’re delicious. A spirit is more like a body than most realize. It has its different cuts, its delicacies and its refuse. And deep within it, hard to find and best of all, is the marrow. The effects of the marrow are intoxicating. If any creature smells, touch
2 comments
Read more

“What is best in life?”: Fighters and Combat Skill

Doesn’t it suck when a character playing a Fighter just says “I attack x” round after round?Do you wish they would say something like “I move forward, circling my opponent to force them nearer to the spiked pit before I drive my shoulder into them, pushing them backward”? What if there were a mechanic to inspire that creativity and allow characters to develop their own signature fighting styles and special moves? While other classes like Specialists and Magic-Users get to enjoy a wide range of skill development and character customization, Fighters gain +1 to attack and some hit points every level. They’re masters of weapons and tactics; they deserve to develop badass, unique abilities as they adventure and improve. Thus, the Combat skill. If Conan were in a band, it'd probably be High on Fire. All Fighters gain the skill when they reach level 2. It applies to one of the following categories, reflecting the Fighter's specialty: melee, ranged (bows & other non-f
Post a Comment
Read more

Inspired by this compilation of old Satanic Panic videos from the Found Footage Festival, featuring a fly brother by the name of Dark Lord Blood.   Once upon a time, there was a kind, sensitive child named Christian. He came from a poor family who worked a farm that never seemed to be able to produce more than just enough to survive another winter. Knowing that there was no future they could give their son, his parents found a sympathetic butcher with no children of his own who agreed to take Christian as an apprentice alongside his other young ward, Blake.   Alas, his master favored Blake, following tradition and respecting his longer term of service. Christian was heartbroken and could take no more. He fled from his village, desperate for a way to prove himself, or perhaps to plot revenge on Blake, who had bullied him in secret and taken the only chance Christian had to raise his station in life and provide for his parents. It was not long before the young boy had exhausted h
1 comment
Read more 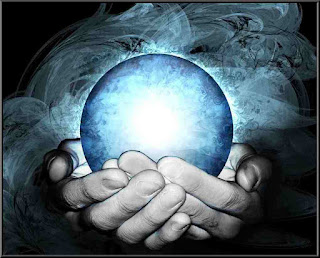 Scrying? Scrying is for pussies. What the fuck is it good for? It's not really interactive and it's a cliche. If you could see across the earth or the universe, wouldn't it be a psychedelic, disturbing experience? If you're doing it right, yes. So here's my attempt at making scrying difficult, scary, and useful, but of course with life-altering consequences. Who dares meddle in magic besides the foolish and the mad? Inspired by Liturgy. A note on them: they were very controversial among metalheads circa 2011 when they made it big with this album, and a lot of "trve" and "kvlt" fans of black metal hated on them a lot. I like them, and fuck you if you have a problem with that, because metal is metal, motherfucker. The track Glass Earth itself isn't really that good, but the album is. Check out High Gold, Returner, and Generation in particular. Glass Earth No./Area Affected: Self Duration:  As long as concentration is maintained
Post a Comment
Read more

Spells That Are Fucking Metal: Wicked Fields of Calm 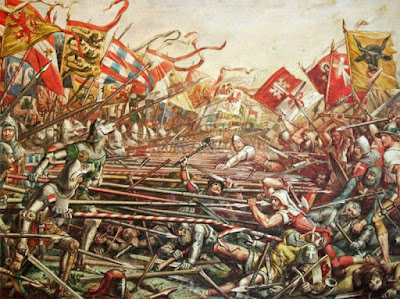 This one is a take on Mass Charm or something like that. A spell that causes people to do the caster's bidding is boring, and way too utilitarian. Magic doesn't give a fuck about what you want. It does what it does, and you don't have control over it beyond pulling the trigger. And when you pull a trigger, something bad happens- something you can't take back.  Inspired by a song from Leviathan's album Scar Sighted. Check it out, and holy shit, those growls. Dude sounds like someone having his soul torn apart. Awesome. Wicked Fields of Calm No./Area Effected: 2+ people (up to X3 people where X is caster’s level), Line of sight Duration: Permanent and irreversible War is a terrible thing. It is unknown why man is driven to kill, when deep in their hearts they know it to be wrong. Rid of this affliction, who knows what great heights nations could reach? Those who know the ways of the universe and the forces that move them realize
Post a Comment
Read more 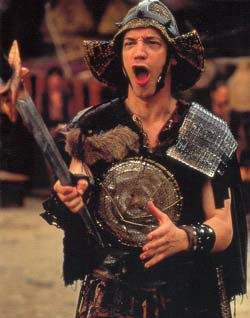 This class is for the player who doesn’t know the rules, or doesn’t care. The player who fucks around and clashes with the tone of the campaign, who’s both annoying and entertaining. It’s a way for them to engage and let them attempt all the stupid shit they want, with astronomical odds and entertainment more in mind than success. Their actions are more or less confined to themselves; they shouldn’t get the opportunity to derail the campaign for other players, but should have the ability to get creative and weird. And the Ref gets to have fun describing the effects of their antics, whether they succeed and baffle the other players and NPCs with their oddity, fail spectacularly, or take place entirely in the imagination of the Lucky idiot while something completely different occurs in reality. The Lucky Idiot can break the laws of physics and attempt actions that are impossible for other characters. Jump off of a cliff and bounce off the bottom like a trampoline? Check. Throw a sw
3 comments
Read more 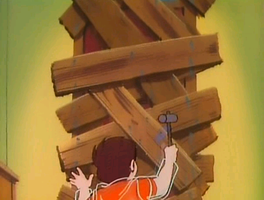 Image: http://tvtropes.org/pmwiki/pmwiki.php/Main/BerserkBoardBarricade Since this will hopefully be a regularly updating campaign chronicle, best to introduce the characters. For now the players will go unnamed, until permission is granted to post their names/chosen aliases. The Cast Errick Müller , level 1 Fighter Veteran of many wars, specializes in firearms and carries an arquebus. Hadrian , level 1 Dwarf Uses a 2-handed great hammer and carries a copious amount of Dwarf Whisky . Ivar , Level 1 Cleric of Odin Outspoken in his faith, seemingly poor in judgment. Recently rendered one-handed. Rose , level 1 Specialist A classic lurk-in-shadows, assassin for hire-style Specialist. Peter the True XXIV , Level 1 Fighter A fighter with terrible stats, including a negative Strength modifier, and a terrible douche. He is the prototypical Lucky Idiot , a class I invented specifically for this character. He uses a Berserk-size sword, drinks milk, and pisse
Post a Comment
Read more 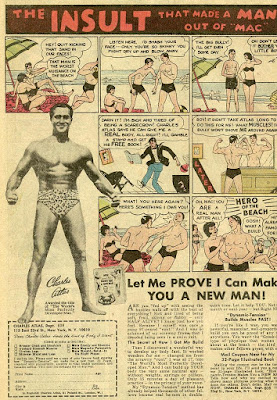 Are you fed up of seeing the fighters walk off with the best of everything? Sick of losing HALF YOUR HP from a single blow? I know just how you feel. Because I myself was a puny 97-pound runt of a Magic-User. Then I discovered a wonderful way to develop my Hit Dice fast. Through the wonders of Astral Channeling! And you can build up YOUR body the very same magical way- without encumbrance, ropes, or ten foot poles. Use the Astral Method, and Turn Your Strong Mind Into A Strong Body!™  Inspired by the album Celestial Lineage by Wolves In The Throne Room. Astral Blood No./Area of Effect: 1 subject, touch Duration: 1 hour/CL or until ended by the subject or caster. Despite their power, many a practitioner of magic has died an inglorious death. A lack of preparation, an unexpected strike, an unforeseen danger. It is the mandate of those with power to meet their greatest potential, at any expense, and thus to make sacrifices in order to survive. In dire circumstances, e
1 comment
Read more

Review: Night of the Slashers by Rafael Chandler 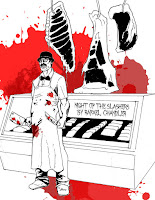 Rafael Chandler is one metal motherfucker. He's written some really awesome OSR material. I love Obscene Serpent Religion enough that I created my own in Beloch Shrike's game On A Red World Alone . He's also well-known for the Teratic Tome and Lusus Naturae , which may be my single favorite bestiary in the OSR. He's a death metal and gore type of dude, so I put on Cannibal Corpse's The Wretched Spawn while writing this review. I was playing it on vinyl because I'm a hipster fuck, but you can click the pic to listen to the album. Check out Severed Head Stoning (track 1) and Decency Defied (track 3) in particular, they're my favorites. Yhe image below is linked to the album. Night of the Slashers is a compact supplement that gives rules for creating an 80s-style teenagers vs maniac showdown. In just a few pages it outlines how to create an Athlete, Loner, Prep, or Rebel, and of course how to create a Slasher. There's a handy die-drop table for
1 comment
Read more

So I work for a LARP company. We run camps for kids age 6-16, and have a weekly tabletop RPG night for older kids, which I recently took over. Our group is mostly 15-19, with one 13-year-old. The company has its own system in beta, but no one likes it. It's like pulling teeth to get the kids to focus, which is fine because they have a great time hanging out, but we're all there to roleplay. We had a few one shots of my game Bubblegum Berserk which is hopefully going to be finished soon, but I wanted to start a consistent campaign. I bring 3 systems I like: Dungeon Crawl Classics, Masks (an apocalypse world superhero game), and LAMENTATIONS OF THE FLAME PRINCESS. I describe them to them. My only description of LotFP is "It's not for everyone, but it's really simple and it's my favorite system. More importantly, it's metal as fuck." The kids voted unanimously for LotFP. My withered black heart fluttered. Next session we start running  The Pale Lady
Post a Comment
Read more

Well hello there, OSR nerds. I am one of you. Join me in my quest to make the OSR more metal. What kind of things will I be posting on this blog? Gameable stuff: spells, abilities, classes, house rules, things that will make your game more metal. Session reports from my weekly Lamentations of the Flame Princess game. Other RPG stuff I'm working on. And if I find something awesome I want to share, maybe a music, movie, book or booze review. If you see something you like on here, please feel free to reshare it all the hell over the place. Dungeons and Dragons Grand devotions to Satan Come revel with me
Post a Comment
Read more