Showing posts from May, 2018
Show all

Sleep is legendary. Considered by many to be the seminal Stoner Metal band, not only did they create a couple of monumental albums, but their members are fucking ridiculously awesome outside of Sleep as well. Matt Pike is the guitarist and vocalist of High On Fire, and Al Cisneros is the vocalist and bassist of OM. Both bands are among my favorites. In fact, I prefer both of them to Sleep (blasphemy!), and Stoner Doom is far from my favorite subgenre- I'm mainly only a fan of Sleep, Weedeater, Yob and Electric Wizard- but goddamn, this record took me by surprise. Sleep's Holy Mountain (Full Dynamic Range Edition) by Sleep Sleep's Holy Mountain- not as heavy as this album or Dopesmoker, but still pretty, uh, dope. Sleep broke up a real long time ago. Their last full album, Dopesmoker, which is basically the definitive Stoner Metal record, came out in 2003. They came together for a very good single in 2014 for Adult Swim called The Clarity , but I still wasn
Post a Comment
Read more

D6 skills are fucking awesome. They're simple, calculable, probably the easiest die to read across the table, and easy to fill in on a character sheet. If you make sure to follow a few rules, you can avoid any common problems you might have, too. I made a post about that  here . So I've been thinking, why the hell not use it for Saving Throws? D20 isn't bad, by any means. It's a calculable die and definitely the best substitute for percentile probability if you're ok with rounding a bit in the name of expediency. The only issue with Saving Throws is that they're descending when a lot of other things are ascending. D20 fixed this by with modifiers that went up every level and reduced it to three save types, but we do things differently here (unless you're playing DCC). But if we're condensing die types down to as few as possible while still trying to keep as close to the original, divinely-inspired Saving Throw values, we can do it pretty easily becau
1 comment
Read more 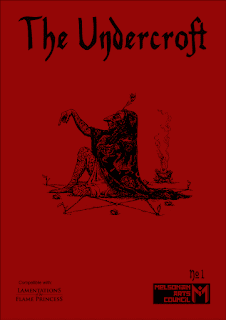 Podnoszenie czarów by LICHO Polish black metal. Seems like all the best stuff is Polish these days. The Barrow of the Old King is an adventure for all levels that can be found in issue #1 of the Undercroft, a zine published by Daniel Sell which has excellent content of all kinds for LotFP. It can be yours for 5 Great British Pounds + S/H, or as a PDF for just under $3.50. I ran it for my group over the course of 3 sessions, which you can read about here  (sessions 15-18) The adventure is location-based and meant to be compatible with all kinds of campaigns. Its default flavor is somewhat Celtic/Nordic, although it could quite easily be re-skinned to many other cultural flavors as well. Chinese or Mongolian springs to mind, as it has a terra cotta army-esque section. The hook is a magic ring in the possession of the titular King, slayer of giants in times of old. The ring is a maguffin, with no particular powers or purpose, and could quite easily be subbed with anything else if
Post a Comment
Read more

My chief design philosophy, and the way I play at the table can be summed up as "Memorable, Minimal, Metal." I don't like to juggle a lot of rules. The main elements of OSR games are combat and skill rolls. Combat rolls are pretty straightforward, so we're going to take a look the d6 skill system works, problems that may arise from it and how to solve those problems. As someone who grew up with 2nd edition AD&D I was used to skills being incredibly granular and using a lot of different methods of resolution. It seemed natural to me, having first encountered that approach, that complexity and verisimilitude were the best rules philosophy. Moving on to 3e, it was better (blasphemy!), but there was still a skill for everything and they tended to discourage creativity through their strict codification of what was possible with or without a given skill. By comparison, the d6 skill system is much more general, open-ended and quick at the table. Description and gam
9 comments
Read more
More posts