Showing posts from August, 2021
Show all

Here comes more inspiration and recommendation. This time around, it's archetypes, films so quintessentially and obviously weird that their relevancy to Weird storytelling should leave you with a gameable idea or two almost automatically. November by Rainer Sarnet This is a slow, black & white Estonian film. I'd probably characterize it as a European Kurosawa film in many ways (no samurai though). It has humor, horror and folklore all at once in a mix both incongruous and somehow elegant (think Rashomon). It's about common folk who use magic to control servant spirits called kratts made out of junk. They sell their souls to the devil to make these things, and they go mad and kill their masters every now and then anyway. What a deal. So this movie is about people trying to solve simple problems with extreme solutions. Kind of like a Weird Magic spell! Magic, demons, plagues and ghosts are just facts of life and you work with them just like you would a
Post a Comment
Read more

Horsemeat? Raw? Are you fucking kidding me? (Sirenswail 5) 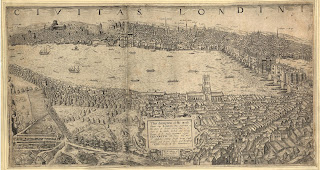 Date: Early fall 1640 Location: London Main Cast: Shio the Alice, Gundisalvus the Magic-User, Salith the Elf Supporting Cast: Helga of the Ulvenbrigaad, Harold the Mule Previously: Our heroes adjusted to life on the island as Cult VIPs, spent their just rewards carousing and investing, and sought further adventure. Their queries aimed them toward the Tower of London to investigate the unexpected and suspicious imprisonment of Archbishop William Laud by Parliament for papism and overreach. Presently: Tired from their long journey, the party sought out an inn where they might avoid notice. They found themselves in London's Southwark, a seedy and pseudo-lawless district south of the Thames at the Strident Goat Inn. Operated by a sweet old couple, Shio overpaid significantly, shelling out a gold coin each night for silence and privacy.  After some time shopping and getting their bearings, they traveled as innocuously as possible to the Tower. Outside they found a young man about to
2 comments
Read more
More posts