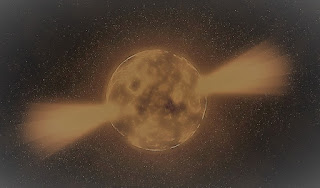 Energy, pure and condensed, like that at the dawn of time. All was one, drawn close and crushed together. Remnants of bodies, planets, and simple base atoms alike, the universe held the fury of infinite flame. This property is not only the result of the matter contained within, but the thoughts, the lives, the suffering of creatures and worlds from realities prior. Echoes, only… but the echoes of eons, cycles, and cataclysms.

The properties of an Aeon Husk are as follows:

Powerful grasp: things within 1’ of the Husk are pulled and held to it. The force of this attraction is so great that it cannot be overcome except by a successful ability check by creatures with a combined Strength of 25 or more. Objects held by this force are slowly liquefied by heat and pressure, and are reduced to sludge and base matter at the rate of 1 day per HD of the object. Inanimate objects are considered to have 1HD per size category (tiny, small, medium, large, great).

Blazing light: Once per day, the Husk can emit a ray of light so powerful that it will cause permanent blindness in a target if they fail a save vs magical device. The ray is considered to have a +5 attack bonus.

Characters can attune themselves to an Aeon Husk, granting them control of its abilities as well as immunity from its effects, a +2 bonus to saving throws vs fire damage, and the ability to speak with creatures from the elemental plane of fire. The Husk will levitate nearby, subject to the character’s control, but if it is more than 100’ away the bond is broken and the ritual must be performed again and others may attempt to do so in the interim.

Bonding to a Husk requires a successful roll-under Wisdom check and 1 hour of uninterrupted focus while performing a ritual of surrounding one’s body with fire or hot coals, which will deal 2d4+2 damage per turn (6 turns). A save vs magical device may be attempted once per turn to negate 10 points of damage. If the character chooses not to make any saves and completes the attunement the beneficial effects above are increased by +1.