Showing posts from 2020
Show all 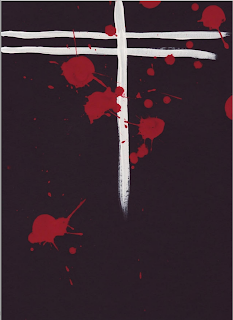 Spoilers for Sirenswail, an LotFP-compatible adventure for characters levels 1-3 written by David Mitchell. It’s available in  print on Lulu and  pdf on DriveThru. The adventure is recommended for 5-8 characters, but I ran it over 3 sessions with only 1 player for the first, and a second for sessions 2 & 3. This went just fine. Date: Late summer 1640 Location: Penzance, southeast England Cast: Shio the Alice, displaced into 17th century earth (Kelly), Gundislavus the Magic-User (Dylan, enters Session 2), Harold, Shio’s faithful bright pink talking mule. Dry of wit and jaded in character. (Kelly-controlled NPC), Helga the barbarian Amazon traveling abroad. Her wolf companion was recently killed and her arm lost in battle, and she carries its still-bloody pelt with her in a state of sorrow, seeking solace from the loss of her friend. (Party-controlled NPC) The adventure begins in the town of Penzance, where young Shio has tumbled through a mirror in the Land of Unreason into a sma
1 comment
Read more 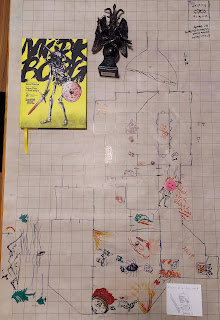 The Accursed Den (but upside down) Rotblack Sludge is the introductory adventure included in the Mork Borg core book. It's well-suited to a one-shot, as are the ones created by Mork Borg's DNGNGN . I ran it for 3 players, using 2 characters each in case of a high body count. This report will include spoilers, obviously.  The players: Kelly Quinn Dylan Our heroes:   Quaker Mary the Dark Traveler. Occult Herbmaster, cowardly and prone to substance abuse. (Kelly) Doctor Dizzy the escaped cultist. Esoteric Hermit, alcoholic and extremely loud with a phlegm problem. (Kelly) Dun Kirk the Zweihander-wielding Gutterborn Scum. Wasteful, ruthless, and stutters when he lies (constantly). (Quinn) Roman the repugnant. Esoteric Hermit, vindictive and lazy. (Quinn) Chastity Goodfellow the Rotten Nihilist. Occult Herbmaster, former slave of a witch, shrewd and giggly. Has 4 monkey companions named Caligula, Nero, Ivan, and Mary, Queen of Scots. (Dylan) *Scream of a dying man* (the actual sound
5 comments
Read more

Spells That Are Fucking Metal: Ocean of Wounds

Sometimes there's just not enough blood. Blood on the ground. Blood on the walls. Blood on the ceiling. Blood on basically everything. Well, here's the solution you've been waiting for! Like all Weird Magic spells, it does not have an obvious, easy application. It's messy, terrifying, has awful consequences, and a very imbalanced power level which can make it either amazing or terrible, depending on how strategically it is used. But basically if you want to rain blood, well, here you go. Abbath by Abbath Ocean of Wounds No./Area Affected: 10’ x CL area up to a range of 10’ x CL  Duration: Until ended by caster. The suffering of the world is not fleeting. It is not past, not gone; it persists to pollute the world over  eons. Its crushing id is perceptible in dark moments and brushes with death. It is an ocean in which all  things will drown, choking. Ocean of Wounds opens this glut of gore and pain, releasing it back into the  delicate, placid plane of reality.
Post a Comment
Read more

A doom metal album of a game. A spiked flail to the face. Mork Borg is the new hotness, the winner of 4 Ennies, and the most visually striking RPG product in years. Rules-light and condensed, while also being completely, absurdly saturated with aesthetics. Every person I've shown it to, roleplayer or not, has told me they need to get one just to keep on their shelf. Mork Borg is art-zine RPG design epitomized. Physically, even holding the book is enjoyable. It has a soft texture and the art is embossed into the cover, giving it a great feel. Every page you flip in the book is a surprise. There is no predicting what comes next- oversized gothic script, silver foil, chiaroscuro, biblical verse and even subtle little easter eggs. It makes you want to play it.  There are 4 general sections: setting, rules, random tables and optional rules, and a starter adventure. The world lore is presented in short 1-2 paragraph chunks for each region and laid alongside evocative art. You&#
1 comment
Read more
More posts