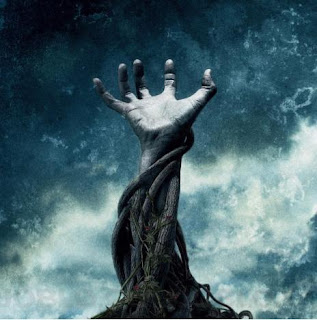 Arboreal Gallows is a song by The Botanist, a weird motherfucker who makes lo-fi black metal with a dulcimer about how plants are going to take over the world and kill us all. It's pretty good. Some of the best- no- THE BEST lo-fi dulcimer metal I've ever heard. Credit where it's due.


Arboreal Gallows
No./Area of Effect: 1d4 Strangler Roots/round, 100’ radius
Duration: Until no living creatures are detected within the targeted area.

For ages only plants, fungus, and bacteria grew upon the earth. Cycles and cycles of decay, growth, death, and decay, taking place in languid times before animals came, graceless and savage. The plants remember. Long ago, as roots intertwined, they grew together and gained common interest: to consume these intruders and return them to the earth, to fuel their own growth and restore their primacy.

Arboreal Gallows is an invitation for the vines to rise above the surface and take what is theirs. Roots and thorns emerge from the soil, grasping at the living or the freshly deceased and draining them of their humors before they are pulled below. In order to cast Arboreal Gallows, blood must be spilled. There must also be a sacrifice, a show of goodwill: the caster must shed at least one hit point of their own blood onto the ground, and welcome the plants into their own body, or be consumed as well. After the sacrifice, a small, thorned slug-like creature will burrow into the open wound. This passenger will grow and spread inside the caster’s body, changing it gradually until it is as much plant as human, and then more, until blood is gone and only chlorophyll remains.

Beginning the round after the sacrifice, roots will begin to rise and attack. Each round, 1d4 roots will emerge and attack the living or pull the deceased or unconscious below to decompose. The roots will continue to emerge until there are no remaining living animal creatures in the area. They will target wounded first, and those who move the most second. Unwounded and unmoving creatures are undetectable by the roots, who sense moisture and vibration. The caster will not be attacked by the roots unless they attack first.

Strangler Roots Armor 12, Move 15′, CL/2 Hit Dice, thorn whip 1d4 damage, Morale 12.
Each root beyond the first to attack the same target raises the attack die for each by one die (2 roots roll 1d6 each, 3 roll 1d8 each, etc). On a roll of 6 or higher, the target is grappled and cannot move until it breaks the grapple by succeeding at a roll-under Strength check with a penalty equal to CL/2.

The parasite inside the caster will sap 1d4 hp for the first week, 1d6 the next, up until it is sapping 1d20 hp. If the caster has not died by this point, they will be consumed and transformed into a plant-based anthropomorphic creature composed of roots, earth, and fungus which must feed on decomposing corpses. They are visibly inhuman, but and convince others they are normal humans via exuding hallucinogenic spores with a successful (7+) social roll. The parasite’s growth can only be stopped by surgical removal and flushing of the caster’s blood via leeching.